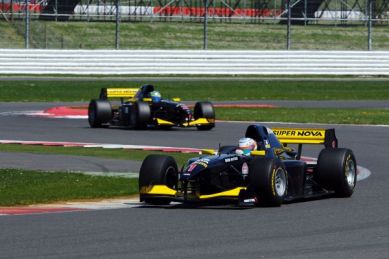 Super Nova secured a magnificent 1-2 in their home race at Silverstone with Narain Karthikeyan converting his pole for the win and a great recovery drive from Vittorio Ghirelli to back him up in second. Francesco Dracone had a strong beginning to the race but was unfortunately forced to retire with an electrical glitch.

Narain made a great start to hold his lead on the opening lap and was pursued by Kevin Giovesi, trading fastest laps during the first half of the race. As the race developed the mandatory pit stop was going to be crucial and the Super Nova crew opted to stop on the last available lap in the pit window and lost a few seconds on the front wheel change. Giovesi's car was called in one lap too late and emerged in the lead but was subsequently penalized by one minute, leaving Narain to take a deserved win.

Vittorio made a poor getaway after his boot slipped on the clutch and lost a few positions. A determined recovery saw him make some great passes before settling in behind Pal Kiss who had good pace and was difficult to follow in the high speed corners. Again the pit stop sequence proved to be the difference with Vittorio stopping a lap earlier and attacking the Zele car on cold tyres to take the position.

Narain Karthikeyan
It has been a dream start for me with Super Nova, topping every session of the weekend and winning the race. Our pace is very good so I see no reason that we can't fight at the front from the reverse grid in race two.

Vittorio Ghirelli
I didn't have a good start and went back to P6 then I got back quite well with some good overtakes on the outside. It's a shame because I think with our pace I could have fought for the win if I hadn't lost so much time recovering in the opening laps, although I have still closed the gap in the championship. Anyway, we have to focus now on race two and try to do the same as Hungary and win from P7.

Ups and Downs in Marrakech Races

We are mentioned on: