You are here:: Home / News & Video / Strong Super Nova showing in Mugello with another 1-2 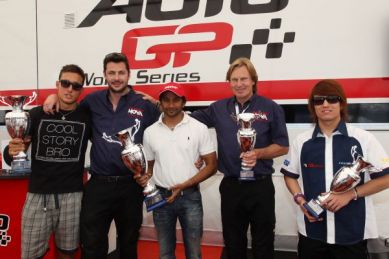 Super Nova again proved their quality in Mugello at the weekend, during round five of the eight race Series. Having qualified on pole (Narain) and third (Vittorio) the Super Nova team had high hopes for a double podium in race one. Unfortunately an unusual sequence of events prevented this but the team bounced back in spectacular fashion with recovery drives from both drivers resulting in a podium for Narain and an eventful top six finish for Vittorio. It all came together for race two though and the team managed to record it's second one-two finish in two events, with Narain coming out on top.

The first race began badly even before the start with a sheered throttle cable bracket causing Narain's car to lose throttle on the laps to the grid. Fortunately he made it to the pit lane and was forced to start the race from there once the repairs had been made. Vittorio on the other hand made a fantastic getaway from 3rd on the grid and comfortably led into the first corner where an incident involving championship leader Sato took him out of the race and brought the safety car out. At the restart Vittorio backed the pack up and executed a great jump on the opposition, only to be confronted by a slow moving safety car on the start finish straight. This forced him to slam his brakes on and allowed Giovesi to get a run on him into the first corner. Both drivers underestimated how cold the tyres and brakes had become following an unusually slow safety car period and outbraked each other into the gravel at turn one. They both bounced across the gravel rejoining the circuit and Vittorio soon came in for his mandatory pit stop. After this a mis-fire slowed him down by 3-4s a lap, losing positions in the process. The problem rectified itself and Vittorio recovered to 6th position.

Narain had a great race from the pit lane and with a bit of assistence from the safety car to bunch the field up, made great use of an early stop strategy to fight his way to 3rd position and another podium come the end of the race.

The start of race two was much more conventional with a slow starting Christian Klien being the only hindrance, causing Vittorio to lift and lose some places. Giovesi made a strong start from P7 but overtook a number of cars by using the outside of the track on his way to lead the first lap - something that would come back to bite him come the end of the race. Once they had overcome some slower cars, both Super Nova drivers set off in pursuit of Giovesi. Despite their best efforts and some understeer affecting the race pace, a good strategy was unable to allow Giovesi to be leapfrogged. Fortunately for Super Nova Giovesi was penalised for his early overtaking advantage and the team celebrated another 1-2 finish, with significant gains on the championship lead.

Narain Karthikeyan
"I would have preferred to cross the finish line in the lead, but considering that I risked to lose many valuable points yesterday during the laps to the grid, I'm quite satisfied with how the weekend went. I also took advantage from the problems encountered by my rivals and I'm getting closer to the overall lead in the points. The next round will be at the Nurburgring - a track that I know well and I want to get even better results there."

Vittorio Ghirelli
"After a great start in race one in which I took the lead, the problems began when the safety car came out. After leading us around very slowly for some laps the lights went off, after which it is my responsibility to dictate the pace of the field. I backed everyone up and made a good restart only to see the safety car parked on the straight. It was dangerous because we all had to brake hard and then Giovesi got alongside me into the first corner. We both made a mistake fighting for the lead and went off, then an engine problem prevented me recovering to have a chance of the race win.

The second race was better but I got blocked by Klien who started slowly and lost a position or two. We then had a lot of understeer but were able to manage the race and the strategy to get back onto the podium and close the gap in the championship. I am looking forward to Nurburgring where I am sure we can have more strong results."

Ups and Downs in Marrakech Races

We are mentioned on: