David began his motorsport career in 1976 completing a Jim Russell Racing Drivers School Course and winning both the races he entered.  In 1977 and 1978 he privately entered and raced a Royale RP24 Formula Ford 1600 in the British National Formula Ford Championship, finishing third overall with the accolade of highest placed privateer.

The results encouraged Royale to offer David a works car on loan for the 1979 season, and Minister lent him works engines. He won both the highly competitive RAC and P&O Formula Ford 1600 Championships, winning 19 races in his Rushen Green prepared car.  At the end of the season he was presented the prestigious Grovewood Award as one of the most promising British and Commonwealth drivers.

In 1980 Sears consolidated his single seater experience by competing in Formula Three for Rushen Green, beating such notable drivers as Nigel Mansell, Stefan Johansson and Roberto Guerrero.  He also won the BMW County Championship, driving alongside Martin Brundle and Patrick Neve in a BMW 323i.

The next season, due to budgetary restrictions, David raced in select F3 races for the fledging Eddie Jordan Racing Team.  He finished consistently in the top six, beating Martin Brundle, Jonathan Palmer and Roberto Moreno on several occasions.

David joined Gerry Marshall in the 1982 Willhire 24 hour race in a Capri, and the pair finished in a strong second place.  In 1983 David moved into Sports 2000 Thundersports, taking several class victories and never finishing off the podium.

In 1984 he drove the works XJS Jaguar for the highly respected Tom Walkinshaw Racing outfit in the European Touring Car Championship, scoring a notable second place in the rain affected Tourist Trophy at Silverstone always in the top three places.

In 1986 he continued to race Group A cars for Ford and Toyota in the UK and Japan, and made his Group C debut in a Sard Toyota.

Again his racing career changing direction, David raced in an Ecosse C2 car in the British Sports Car Championship with Don Shead.  At  Donington he shared the winning car with Andy Rouse in the only two driver race in the British Saloon Car Championship and again finished second in the Willhire 24 hour race in a BMW M3 with Robin Brundle and Gerritt Van Kouwen, being the quickest driver in the two car, six driver team.

In 1989, driving a Sierra Cosworth with Andy Rouse, David won the Donington Group A race in the British Touring Car Championship, and drove with Will Hoy in Japan for Auto Beaurex Racing, achieving consistent top three places.

1990 saw a highly successful privateer entry at the Le Mans 24 hour race when the all British driver line up of Sears, Anthony Reid and Tiff Needell drove their Alpha Porsche to third, behind the two works Jaguars.

Having finally hung up his helmet David formed the International Formula 3000 team, Super Nova Racing, in January 1994, which in 2005, changed to Super Nova International Racing to compete in the newly founded GP2 Series.

David Sears has an outstanding reputation for extracting the best out of his team, and his ability to maximise a driver’s talents and focus his mind is renowned within the motor racing fraternity.  David is the son of Jack Sears, twice British Saloon Car Champion and a leading driver in the 1960’s.  Jack is now a director of the RAC and past Chairman of Silverstone Circuits. 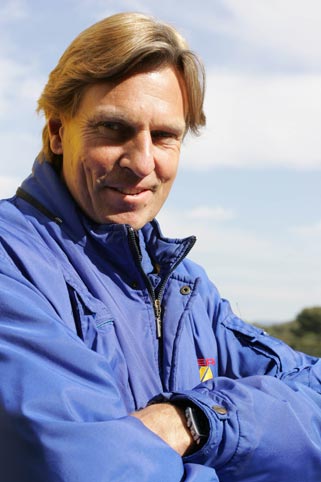